In my previous blog post I described some of my attempts to create a swept blend along a sinuous multi-segment path.

What I ended up with last time was a form created by selecting a series of profiles hosted onto the nodes of a divided path (without selecting the sweep path as part of the form).   In this example I had to indent the ends of the divided path so that the profiles were more or less linear and Revit could create the form. 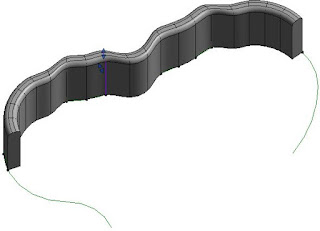 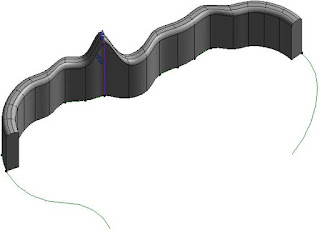 My next task was to extend the form back the full length of the Divided Path.  I used a similar technique in a previous post where I had hosted points on a spline.  In this case it seemed easier because I could adjust the Divided Path properties by changing its 'Beginning and End Indent' rather than selecting individual points.

Going for broke and setting it right back to zero certainly did not work - it was unable to create the form.  Technically I was only trying to modify the form - so it would be interesting to know if the warning message is telling the truth:  is it actually recreating?  or modifying, in which case the dialog box wording is wrong.

A less dramatic change to the beginning indent from 3700mm to 3000mm was still too much for Revit.

I tried recreating the form with more profiles, spaced more closely - but that did not work either, when I tried reducing the indents

So I came to the conclusion that Revit is just not capable of creating a sinuous swept blend form like this if you do not include the path in the form creation.

So that took me back to an idea that I had rejected earlier on:  tracing a spline over the chain of arcs/lines in order to achieve a single element path for the swept blend.  And, I needed the spline to follow the arc chain as closely as possible, and preferably to adjust when the underlying arcs are changed. 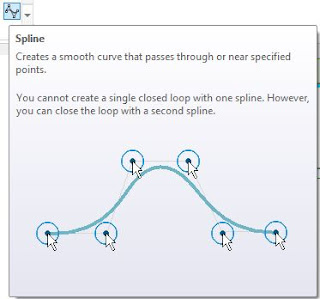 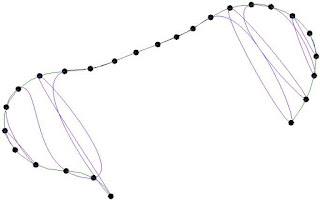 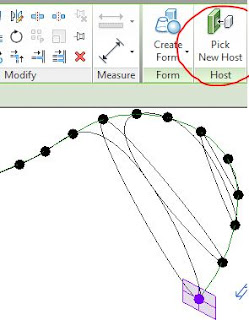 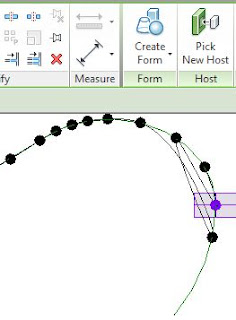 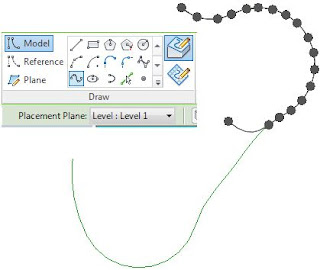 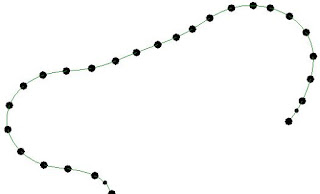 1.  The orientation of the profiles will most likely be different to when they were hosted on divided path nodes.  In this example I got lucky and they were correct: 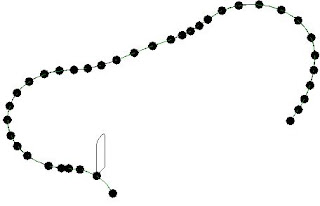 2.  You would need to place every profile.  It is much easier to create a divided path and host one profile onto a node, then repeat it.  In this example I was unlucky and the orientation was different to the original divided path!  This is typical of Revit - the mysteries of why a divided path on a series of arcs vs on a spline will produce nodes that have different xyz orientations is just that:  a mystery.  I will write another blog post on that subject some other time. 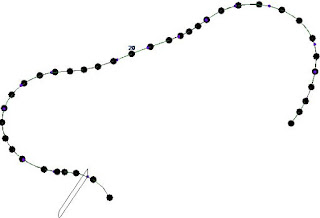 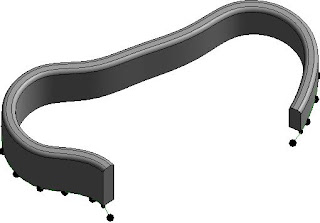 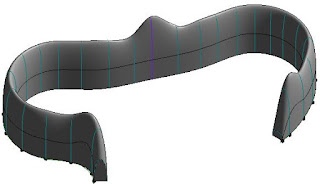 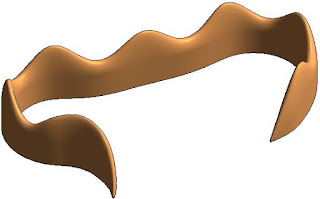 Anyone who has read this far will agree that this is a tortuous process (pun intended), riddled with workarounds.  The main purpose of this blog post is to demonstrate to the software developers how complicated it is to create some forms in Revit - how many roadblocks there are in the software; how many workarounds you have to learn; and how long it takes.  If anyone has learnt any tricks along the way, that is a bonus.

There are other programs around that could do this in minutes rather than hours (or days) - but they lack the precision of being able to document something that is buildable and follows a more geometric basis, such as a series of arcs rather than splines.  So I would much rather be able to do this in Revit to start with.


In a recent blog post I was trying to create a swept blend (or loft) along a single spline path
and I encountered a few problems, which were mostly (but not all) solved by including the spline path as part of 'Create Form' process.  That was just a preliminary test for what I ultimately wanted to create:   A swept blend along a sinuous multi-segment path made up of arcs and lines - not a spline (as seen above).
Here follows the next instalment in my trials and tribulations.  I will start simply by comparing the traditional methods and conceptual massing creation of a sweep, before moving on to a swept blend.

In the traditional family editor, Revit can easily create a sweep along a sinuous multi-segment path, unless the radius of a curve on the path is too small and causes impossible geometry.  This example below is a simple sweep of one profile along several linked arcs and lines.  It creates a pretty good looking form if the arcs/lines are at perfect tangents to each other (in both the path and profile) - it does not show any join lines.

Try creating it in the Adaptive/Conceptual Massing Environment (CME) and you don't get such a good result - and there is less likelihood of Revit actually creating the form at all.  The example below is created using the same geometry as the one above, with some provisos:
Notice the nasty join lines at every change of line/arc in the path;  likewise in the profile, which again has perfect tangent transitions.

If you try something similar as a swept blend you run into roadblocks very quickly: 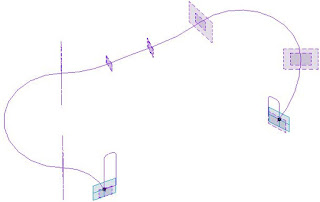 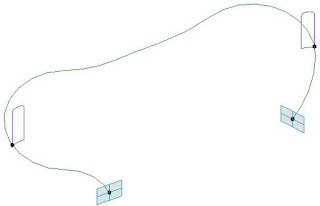 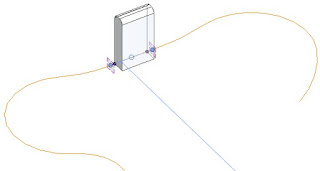 This technique is getting painful and is obviously not going to work - Revit cannot create a swept blend on multiple segment paths!  What a major limitation on a sophisticated 3D modelling program.

Another approach is required:

How to convert the arcs and lines into one path?  Well you could try tracing a spline over the top - but that has several problems:

Another option is to use an inbuilt Revit technique:  'Divide Path' - this creates a single element that sits on top of multiple lines/arcs selected in a chain. 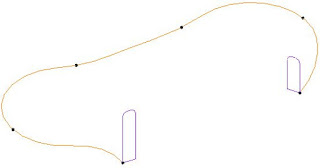 You could start placing profiles along the path, and try to link them as a form - by selecting them all and 'Create form' (without defining a path).  Sadly it does not work - it is unable to create form.  Even if it could, if they are too far apart it might take shortcuts between each profile (ie. it does not respect the order they are on the path).
If you select only some of the profiles, and create a form, you can see that it will not follow the path at all closely, especially if they are not close together. 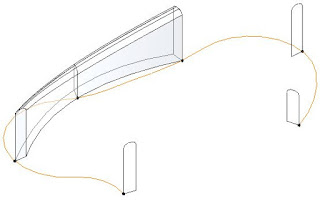 If you create separate forms for each pair (or trio) of profiles you get pretty awful results: 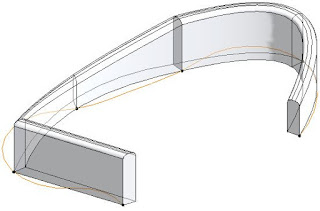 Even if it could get the order right it also cannot do all the profiles in one go as the curves are too tight for it.

So, is the answer to increase the number of nodes on the divided path and add more profiles?
It gets a bit tedious placing adaptive profiles, and sometimes they flip for no apparent reason.

So maybe we can use another Revit tool to place multiple profiles:  Repeaters

If you place just one profile on a divided path node, you can use the 'Repeat' command to array the profile onto every node (they still sometime flip!).
If you select all the profiles, Revit should have a better chance of more closely following the path as it joins them all, right?
The next problem is that you cannot create forms directly from a repeater - you have to first dissolve the repeater using the new (in v2015 r2) 'Remove Repeater' command.

This command was wrongly named in my opinion, as it dissolves the repeater back to individual profiles rather than removing it altogether. 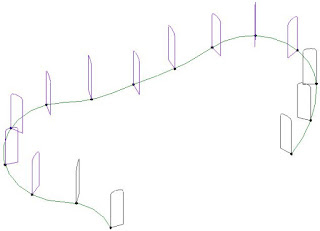 If you select all the profiles, Revit still cannot create a form as the path is too sinuous for it, and it still gets the order of profiles wrong even though they are closer to each other

The next trick I tried was to push the profiles back along the divided path so that each was closer together, and did not try to go around such a sinuous curve.  This is simple enough on a Divided Path by changing its 'Beginning and End Indent' properties 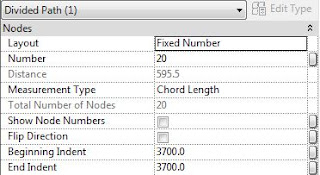 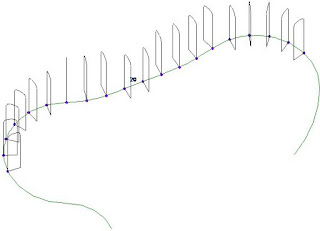 I then selected all the profiles and 'Create Form'.  Finally some success: 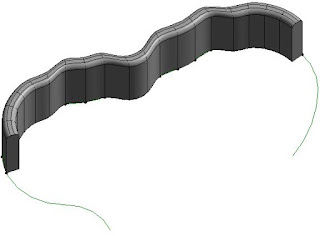 By hiding the profiles, it showed that the form does not have vertical joints - this is because we did not actually define the path by selecting arcs in the path.  that probably means the resultant form is not following exactly along the arcs, but it is close.  We still get joints running along the top because the profile is made up of arcs and lines.  That would not have happened in the traditional Revit family environment - Harrumph! 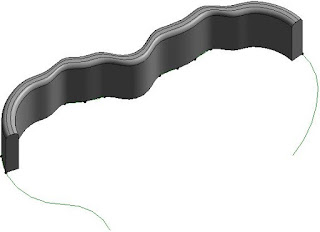 But this is still effectively a sweep, not a swept blend.  That part is easy to solve:  each profile has a height instance property (because I made them that way - it could be a type property).  So the heights of each one can be adjusted, and the form follows along. 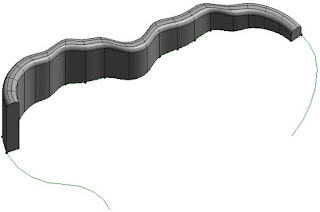 The profile heights could have been adjusted before creating the form 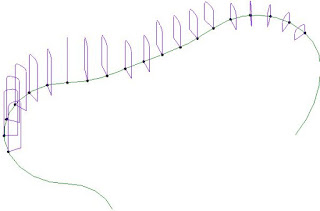 Once you hide the profiles, it is starting to look like the Loch Ness monster that I was trying to create 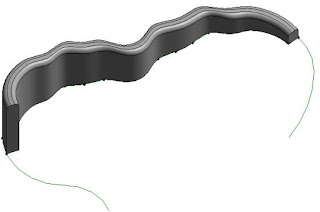 The next problem to solve is how to get the form to spread along the whole length of the path . . . .

Posted by RevitCat at 19:02 No comments: