So you think you know what the pin icon in Revit looks like, and exactly what it means?  Think again - the icon actually changes all the time, depending on the situation and sequence of events.


Most elements can be 'Pinned' in Revit to make them more stable:  when an element is pinned in Revit, it cannot be moved, deleted or edited without unpinning it – but there are exceptions . . .

When you select an element in Revit, the ribbon displays a 'Modify' panel with two icons for pinning/unpinning (top right of the panel):

These icons are used as command functions to operate on the selected element(s); they also indicate what command is possible on those elements - in effect, showing the current 'pin state' of the  element, but in a confusing way:  the greyed out icon indicates the current state.

The icons that display on the selected element operate in the more logical (but reverse) fashion - as well as being command functions when clicked on, they do actually indicate the current 'pin state' of the  element(s).

This is where it starts getting tricky:
The keyboard shortcut to permanently unpin elements is ‘UP’. Multiple elements can be unpinned at one time using the UP shortcut.  There is no keyboard shortcut for the temporary unpin command.

This difference between the two operations is almost like a partly implemented idea for a proper temporary unpin command - I wish that Autodesk would take it one step further and give us a proper temporary unpin (or persistent pin):  this would allow us to unpin an element, then edit it, after which it would automatically repin itself.  There is a precedent for this in Revit with the temporary 'Exclude Options' selection checkbox (which rechecks itself automatically).
Feel free to vote for my Revit wishlist idea for Persistent Pins

In the bottom right corner of the Revit window are the orange selection pin icons, although these perform a totally different function: 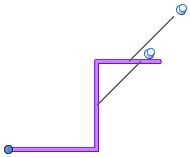 Pin icons may also be hidden by group add/remove icons if you select an element inside a group without editing the group.

The way around this is to edit the group


Chain-Pinned ‘hosted elements’ (eg. Curtain panels) behave completely differently to normal pinned elements.  However, the icon for this is very similar - it has a chain link next to the pin.