Having recently returned from the inuagural European Revit Technology Conference I thought I'd give a quick report on how it all went.  Having been to all the RTC events this year, and all but one RTC ever, it was interesting to compare this event with others.

Firstly, the venue was amazing - a mixture of old and new in the historic city of Delft in the Netherlands.  Delft looks like a miniature version of Amsterdam but without the swarms of tourists - very old Dutch gabled buildings lining canals. 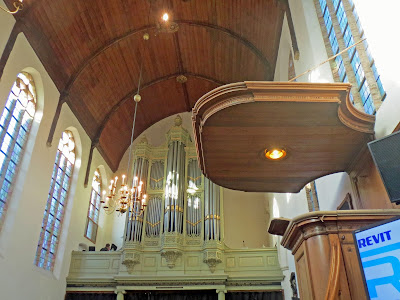 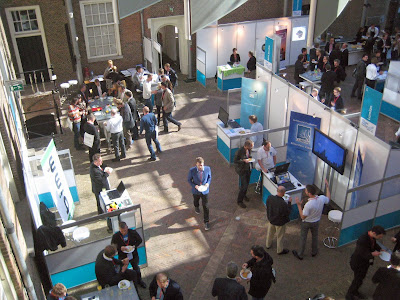 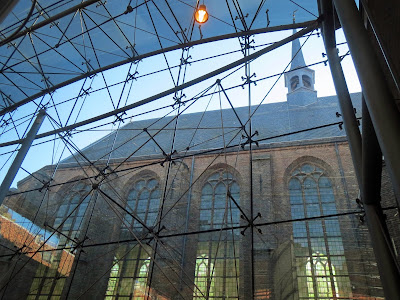 The walk back to the main venue was a bit scary on two counts: 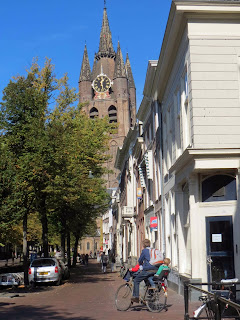 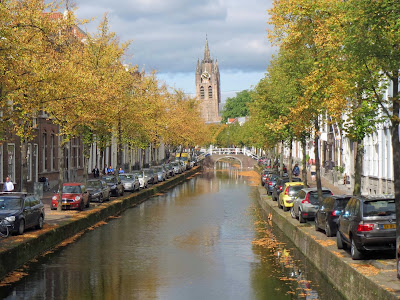 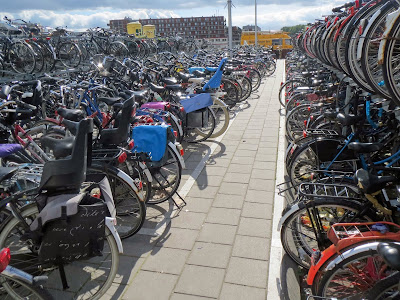 Very sensibly the inaugural conference for Europe was kept small - this made it feel more intimate, like the earlier RTC events.  There were not so many session to choose from, thus making decisions was not as agonising - only 3 instead of 6 or 7 concurrent sessions.  Even so, I still missed one or two things I'd liked to have attended.  The two day length seemed so much shorter than other RTCs - it was over so quickly.  Hopefully it will expand to 3 days next year, now that it has proved to be such a success in Europe.

Speakers were very international - from Europe, North America and Australasia.  Attendees were from all over Europe, but there were large contingents from Norway, Denmark (one company sent 7 people!), the UK and of course the locals (The Netherlands).

The Day Families Became Self-Aware
One of the highlights for me was the session presented by Matt Jezyk  - "The Day Families Became Self-Aware" - an intriguing look at what might happen to Revit families in the future.  In this session Matt started off talking about how useful it would be if families were able to react to their Revit environment - for example, a door that is hosted in a fire-rated wall might need to enable its own fire-rating and change its panel thickness and materials etc.  Currently this is a very manual process for the user having to swap out the door type  (although we do now have reporting parameters that allow us to make the door respond to wall thickness).   Matt then talked about the whole process of API and Dynamo/Python scripting where it is possible to make Revit do all kinds of things, being driven by external code.  However, scripts and API have to be initiated by the user - they cannot react to stimuli or changes in the Revit model itself, so we are still reliant on the user again.  This is all stuff that we know about or are starting to learn of.

Then the exciting stuff started - Matt proposed a type of scripting that could automatically run itself as a response to when a change is made in Revit.  He showed us a prototype of Revit families that contained Dynamo or Python scripts - these families could be placed into Revit models as normal.  When placed the family would run the script and change the component according to where and how it had been placed, for example a door hosted into a wall could check its fire-rating and adjust itself to suit.  Not only that, but if the wall was to subsequently change, the hosted door would re-check the fire-rating and respond again.  So, no user intervention or checking is required.  Wow!  My reaction to that was the same level of excitement I had when I first saw Revit automatically change a drawing reference when a sheet was renumbered:  I want it, and I want it now!!!

Needless to say, this was only a proof of concept, so there is no guarantee that it will ever be implemented in Revit.  Of course it takes quite some time for something like this to reach the market, supposing they do go ahead with it - lots of testing and checking needs to happen.  However, the buzz that was generated in the conference after that was quite noticable.  I was only sorry I was not able to attend Kelly Cone or Martijn de Riet's concurrent sessions - but this was unmissable stuff.


My own presentation went well - incorporating some improvements since last time.
It started off showing some fun stuff with Fractal theory and example patterns in Revit:


After the fun I demonstrated a few practical examples of how to use nested repeater patterns in Revit, including a picket fence that follows the contours of a site toposurface.

Following this was a less practical but still useful example of how to nest repeater patterns inside curtain panel pattern components in order to force Revit to trim the edges of repeater patterns (which it normally will not do): 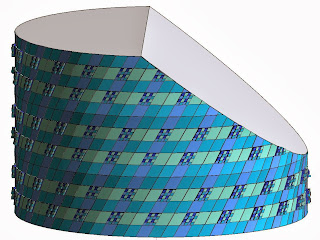 Then came the demo of creating a Revit model of the roof of Santiago Calatrava's Gare do Oriente in Lisbon.  This consited of multiple repeater patterns nested three levels deep, which allowed the creation of very a flexible parametric model with minimal use of maths

All of this was done as a live demo in Revit, albeit with some partially prepared sample files in case it didn't work under the glare of an audience.
Roll on RTC Europe in Dublin in August 2014.
Posted by RevitCat at 12:24 No comments:


This post demonstrates how it is possible to schedule repeater component cell numbers on an orthogonal pattern within the Revit Conceptual Massing or Adaptive Component environment:

To set this up, first you need a rectangular surface, which has been divided; then you need to place an adaptive component onto the node(s) of the surface; once arrayed in two directions using the repeater function you can schedule the cell (column and row) numbers on the divided surface.  Of course it isn't that simple - the adaptive component has to be aware of its location relative to a fixed point, by doing some calculations:

To create the adaptive component:
1.  Start a new generic adaptive family.
2.  Set up the geometry for the pyramid (optional):

3.  Setting up the “Reactor” controls (Important): 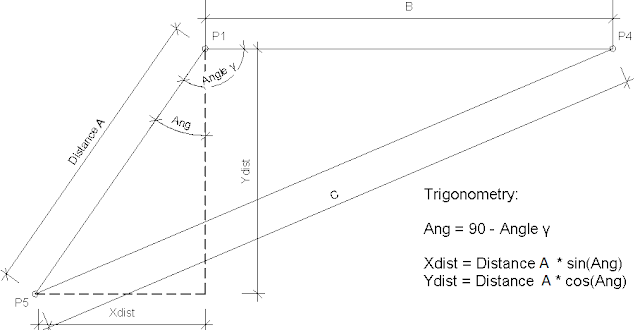 4.  Calculation of column and row numbers: 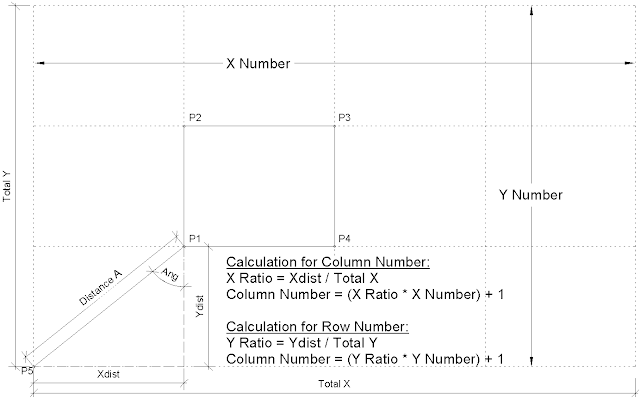 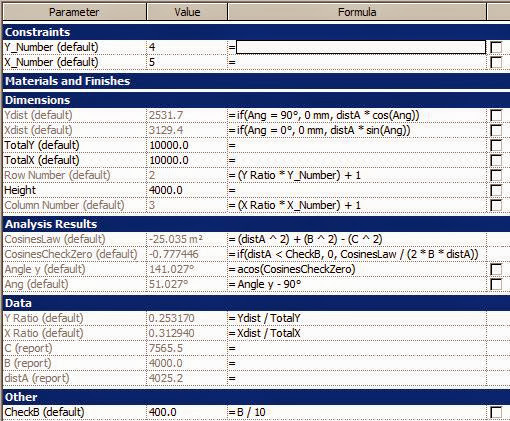 5.  Creation of the repeater: 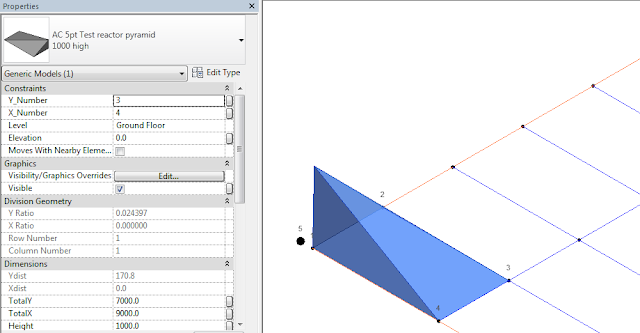 6.  Create a generic Schedule:
When you edit the mass family, the schedule temporarily goes blank.  Sadly this means that it is not possible to drive the geometry from the schedule.  However, it does make it easier to identify and label components in a schedule – useful for adding and editing Mark values to match column and row numbers.

This technique will not work with a curved surface because it all works by calculating the actual distance from the control point to the BL corner of the pyramid and relating that to the overall length of the surface.  It will only work on an orthogonal divided surface, unless you are a mathematical genius and can write formulas to handle more complex geometry!
Posted by RevitCat at 17:26 No comments: