In my recent presentation at BILT ANZ 2018 in Brisbane - Creating Nurby Forms in Revit, I started off by analysing how the traditional Revit 3D form creation tools can be matched in the Conceptual Massing Environment.

Traditional 3D form creation in Revit has 5 predefined sketch-based tools – these are well understood by most Revit users. They are also very limited when it comes to creating double-curved or organic shapes.

Unlike these, the newer Adaptive/CME form creation methods (from Revit 2010 onwards) are somewhat of a mystery to many users – the logic is completely different, and there is only one ‘Create Form’ command.   However, it is capable of creating much more organic shapes than the traditional tools.

I have previously listed an extensive comparison between the 'Rival Revit Form Creation Environments'.  In this series of blog posts I will go into much greater detail on the subtle inconsistencies between each form creation method.  Understanding these 'exceptions to the rule' make the whole Conceptual Massing Environment (CME) much easier to work with - I use the word 'easier' rather than 'easy', because the CME is never easy!!

One of the big differences between the old and new methods is the ability to ‘Loft’ shapes in the CME, or to use multiple profiles in a swept blend:
There are many more differences that will be described in the following posts.

The CME Create Form function only has one icon, with no user controlled options - and it works in several different ways, depending on what elements you select:
It is not clear to the user how Revit decides which creation method to use and how it decides which element defines a profile, and which is a path or axis, nor the order of multiple profiles.  This is the crux of the problem - in simplifying the User Interface to a single command icon, Autodesk have robbed the users of predictability and real control over the end result.

Some of the problems could be alleviated by the following two capabilities - please vote for them on the Revit Ideas wish-list if you agree:

Traditional Methods in the CME

Each of the traditional form creation methods (plus lofting) are examined in the Conceptual Massing Environment in the following blog posts (links will be enabled as each is posted):
1.  Extrusion
Extrusion Offset Properties
2.  Blend
3.  Revolve
4.  Sweep
5.  Swept Blend
6.  Loft
7.  Hybrid Swept Blend / Loft

The form creation profiles can be:
Depending on the original profile, the form behaves quite differently - It makes a big difference whether you use Model lines or Reference lines:
If you host points onto a path, and then host profiles on those points (as recommended by Autodesk), there are differences in behaviour once a form is created from the profiles:

There are other subtle differences, to be explained later - in the individual form creation method posts.

Repeaters are a kind of array, in the CME world 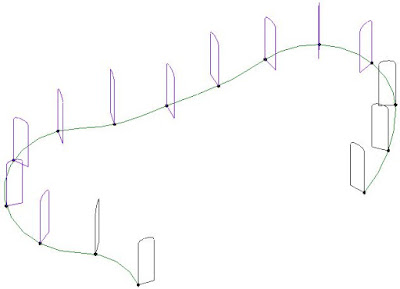