For the first decade of its life, Revit really only had one method of creating 3 dimensional forms - in the Family Editor (aside from those generated by system families).  When Revit 2010 was released we suddenly had a whole new way of doing things with the new conceptual massing tools.  Since then, many people have been grappling with the seeming divergence of these two very different Revit environments.  Now we have the prospect of such tools as Dynamo introducing yet more ways to work in Revit - however exciting it seems, Dynamo has the potential to cause even more disparity and fragmentation of not only the workflow but the development effort by Autodesk.  This has been worrying me for some time, and I've been thinking about how best to convey our concerns to Autodesk in a positive constructive way.

Recently I was reading Paul Aubin's new book:
Renaissance Revit:  Creating Classical Architecture with Modern Software
In chapter 1 he discusses some of the differences between the Traditional Family Editor and the Massing Environment (Conceptual Massing Environment or CME as Autodesk refers to it).  I realised that there are a whole lot more differences, that are not clearly documented anywhere, so I thought I would try to address the issue here.

Before I do that, a little more about Paul's book:

Although the overall intent of the book appearsto be about using Revit to create classical architectural elements, it is in fact all about using Revit to create some tricky geometry - and the techniques that he describes could be used for all sorts of purposes.  For example, in chapter 4 he describes how to constrain arcs, circles, elipses and splines that might be used to parametrically control families.  I wish I had read that before embarking on my own exploration of the subject, which had nothing to do with classical architecture - it would have saved me a lot of time and effort.   The early chapters of the book also set out a lot of good practise that anyone should apply when creating Revit families, for whatever purpose. 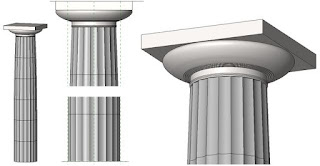 Skipping on to Chapter 11 gives us a good general introduction to creating families in the Conceptual Massing Environment before launching into ways to apply that specifically to classical architecture.  Again, these principles are relevant to many other situations when building Revit models.  Thanks Paul for a fascinating new book.

Below is an analysis of the differences between the traditional Revit Family Editor and the Conceptual Massing Environment, follwed by some specific differences that apply to Adaptive Components - these generally follow the massing methodolgy but have a few more quirks of their own.  The table below is compiled from some of Paul's observation and some from my own experiences of working with adaptive components in particular.  This is not a definitive list, and I may have made errors or omissions.  Please feel free to comment, and I may update the list in the future, based on feedback.

I hope that Autodesk can make use of this analysis to help bring the two rival Revit environments back together in the future – and I use the word rival quite deliberately because they seem to be fighting each other much of the time.

I have traffic-light colour coded the comparisons:


Here is a further analysis of the weird and wonderful (or not) quirks of trying to create equivalent traditional Revit 3D forms in the Conceptual Massing Environment
And more detail on individual form types: