In 2013 I presented a paper titled "Fractal Fun with Revit Repeaters and Adaptive Components" at three RTC events in Auckland, Vancouver and at the inaugural European Revit conference in Delft, in the Netherlands.  Part of the presentation involved a live demonstration of how to construct a parametric Revit model of the roof of the Gare do Oriente railway station in Lisbon, designed by Santiago Calatrava.


Since then I have had a number of people asking me how it was done - it was of course described in step-by-step detail in the RTC handouts.  Those are not so easily accessible now, so I am posting the content here, in stages.  Part 1 involves creating a rig for one of the structural supports of the roof. 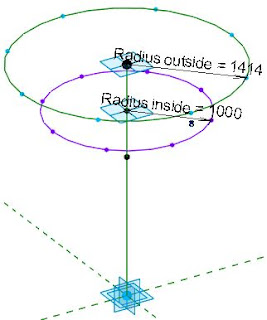 I will not show a step-by-step guide here as the process is described in a video tutorial:
here is a youtube link


As a reminder, below is a list of the steps required in the process:

The basic rig is now complete, ready for adaptive components and repeaters to be hosted on it.  These will be covered in following tutorials.

Step 2  Putting roof panels on top of the rig . . .
Step 3  Creating the structural elements and placing on the rig
Step 4  Adding Struts to the structure
Step 5  Assembling the Array of Structural Columns