Go to Revit Stair & Railings Index Page
In the previous post I talked about creating stair landings in Revit.  Now its time to look at modifying landings, which is very different to the old sketch method (pre-v2013).

Stair landing components can be modified individually but they interact with run components in unexpected ways, so you need to learn the rules as it is not always intuitive. If stair landings have been created by the new sketch method or have been “converted”, then the interaction with runs is more limited.

To modify a landing component you generally need to be in edit stair mode. The exception to this is changing landing properties, which can be accessed by tab-selecting the landing without editing the stair.  There are various methods to modify a landing, each with their own benefits.  There are also some subtle differences between landings in v2013 and v2014 (and later), to be described further on:

The Align tool will behave differently depending on what you select to align and what the relationship is between linked components.

If you use the Move Tool on a landing (in plan), it will also move the connected run components; on a simple stair with one landing connected to two runs it will effectively move the whole stair;  on a more complex stair the end result depends on the other connections (see later)

If you want to move just the landing but keep first/last riser locations, you have to use some reverse logic by moving the whole stair then adjust the risers back.

If the stair has two or more landings, then the intermediate run will be connected to both landings.  The knock on effect of moving one landing would be to move the free run but not the intermediate run (which is attached to the other landing);  the end result is to change the landing shape or size:

In this example the landing is selected and moved to the right and it automatically changes from rectangular to L-shaped.  The free run at the base of the stair moves, but the intermediate run cannot move - so the landing has to change shape to remain attached.

The rule to understand here is that when a landing is moved in plan its height cannot change thus something else has to give (its shape and/or attached run locations).

Another "not so intuitive" workflow is to use the Move Tool on an attached run component to adjust the landing shape.  In this example the run is moved in order to add a stagger into the landing so that both runs no longer align. 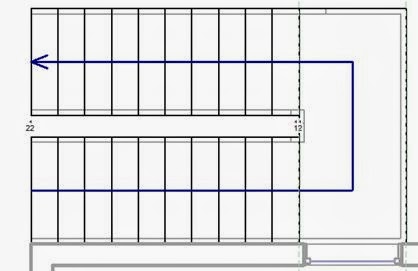 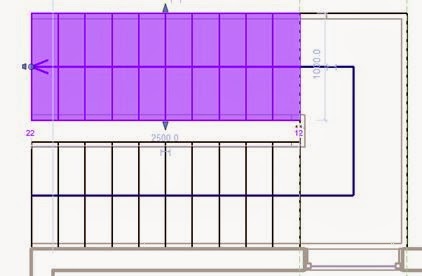 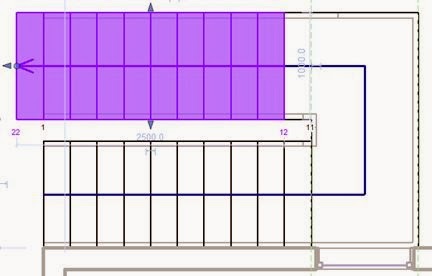 Revit v2014 has additional shape handles on the landing, which allow alternative more intuitive workflows to achieve this (see below).

Stair layouts can be changed in section or elevation too.  The landing height can be changed by moving it up or down to resolve headroom issues - it will snap to the nearest multiple of riser heights, so you don't need to calculate the exact amount to move it by in order to maintain equal risers.  Revit will move the run start/end points to suit. 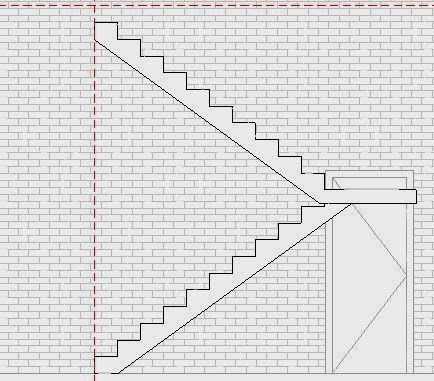 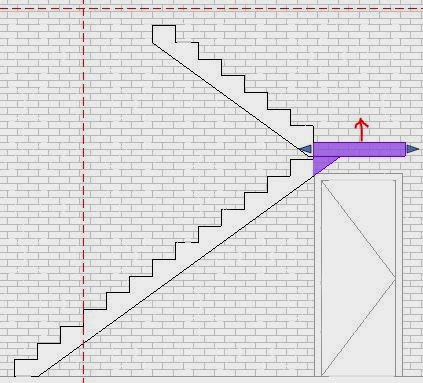 The landing height can be adjusted by using the arrow shape handles on adjacent runs.  The number of risers on one run will be reduced, while the other is increased, thus changing the start and end locations of the stair without moving the landing in plan:

NB. Do not use the filled dot shape handle at the base of the stair, unless you really want to change the height of the start of the stair.

You can use a side arrow shape handle to make a landing width greater than that set by adjacent runs, but it will not let you make it less.

Once a landing is wider, that offset is sometimes maintained if an adjacent run width is changed - but not always.  It seems unpredictable.

In v2013, landing shape handles are fairly limited in what can be achieved.  On a rectangular half landing (U-shaped stair) there are 4 shape-handles.
If you want to stagger the runs where they meet the landing, it seems natural to select the landing and try to adjust it using the shape handle where the landing joins the runs. It won’t let you drag the handle towards the runs, only away from them. But this actually gives a different result - it cuts a notch and it moves the outside of the landing and to maintain its  depth (although it may be a desirable outcome in some situations).  To achieve a stagger in the landing we must move one of the stair runs towards the left (described previously). 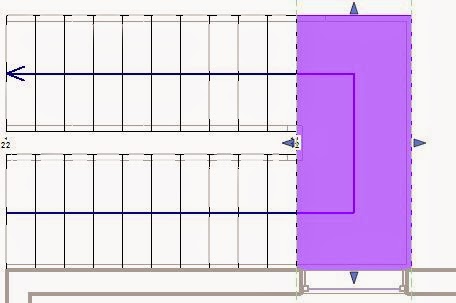 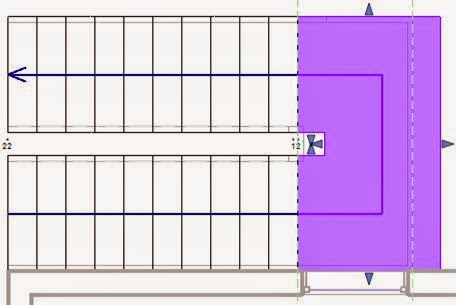 Modifying adjacent run widths will affect the aligned landing width.  Landing sides will continue to align with runs unless you over-ride that using the landing side shape handles.
In v2013 it may also affect the depth too, but the rules are tricky:  changing a run width will only affect the landing below the run, not above it. 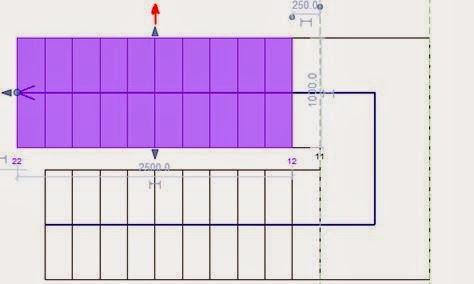 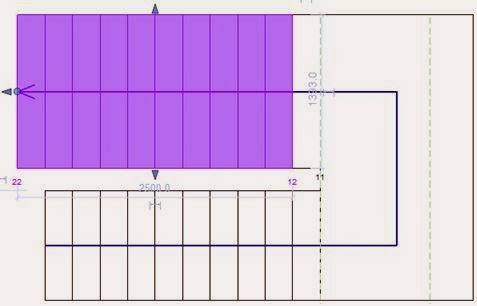 The rules seem random until you test it systematically as shown below: 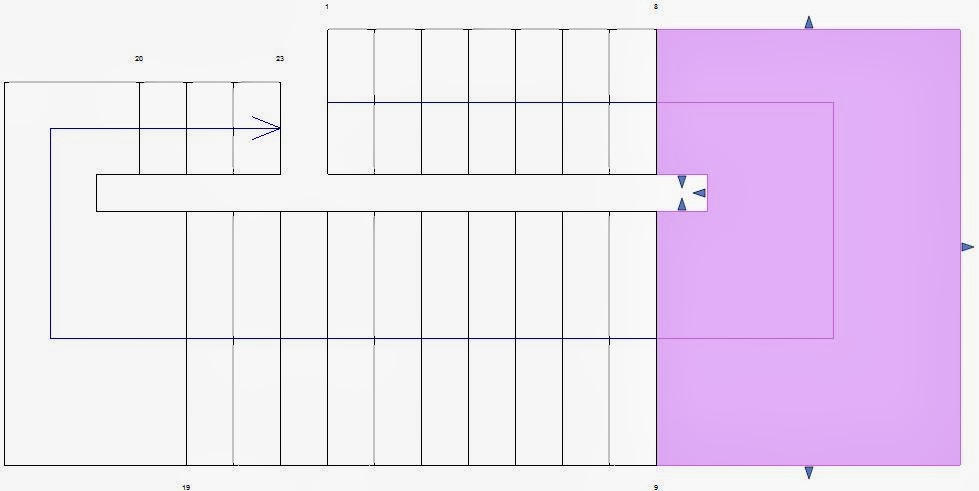 In v2014, landing shape handles have been improved, but at the same time the automatic control of landing depth has been broken - this is something you need to watch out for.  Additional shape-handles are available between each run and adjoining landing.  This allows you to put a stagger into a rectangular landing more intuitively by dragging the landing shape handle (rather than relying on moving a run). 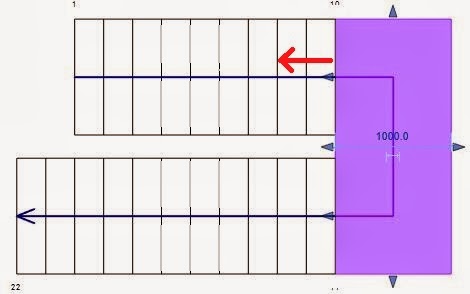 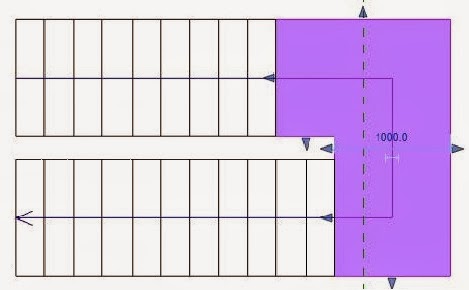 The shape handle in the stair well works similar to v2013 in allowing you to put a recess cutout into the landing.  However, in v2014 it will not maintain the landing depth - but it does give a warning message that the "depth is less than run width".  This warning is triggered by Revit comparing the landing depth with the smallest actual width of either attached run, not the minimum run width set in the stair type properties (actual width can be made smaller than the minimum required). 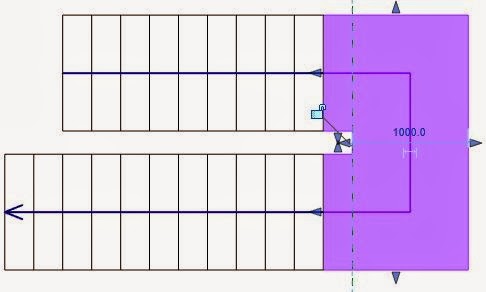 Modifying adjacent run widths in v2014 will only affect the landing width but not the depth.  This may be logical if you make one run wider, but if you make both/all runs wider you would want the landing depth to match - but it won't, so you have to manually alter all landings, meaning it is only too easy to get a landing depth that is smaller than the narrowest run. The outside line of the landing will only change if the outside shape-handle is explicitly moved.

Landing heights can be changed in the properties dialog box - you need only type in an approximate value and Revit will correct it to the nearest multiple of riser heights.  This will not move the landing in plan, so the end result will be that adjacent runs will alter to accommodate the new landing height. 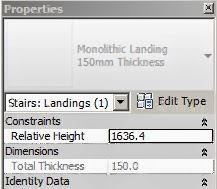 Landings do not have Width or Depth instance properties, so you can only adjust those dimensions by:

Automatic landings can be converted to sketch landings so that you can modify the plan shape to something that is not possible to create using automatic landing features.  Automatic landings can form a wide variety of shapes, but cannot:
Convert to Sketch should be the last resort, and should be avoided where possible.  This is irreversible - the only way to make a landing revert to automatic behaviour is to delete and place a new one, which would remove any attached elements, modifications or annotation.
Once a landing is converted to a sketch: