Back in 2012 this drawing was the Innovation category competition winner at RTC North America (Atlanta).  It was meant to represent the design process (on yellow trace paper and in Revit) of the Octopus Hotel designed by PTW in their Shanghai office.  The initial design modelling was done in Sketchup and 3D Max, then 2D documented in Autocad.  Then we had to start really documenting it in Revit to make sure the organic shapes were buildable. . . . . 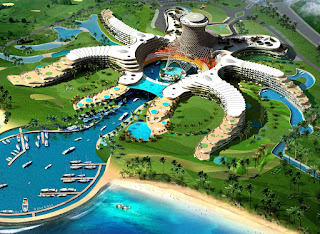 The first task to solve was the plan layout - making sure that each hotel wing (octopus leg) had regular radius curves with smooth transitions between concave and convex curves, with a minimum number of different shaped hotel rooms.  Trying to do that in 2D was painful - lots of reference planes/lines and aligning centre-points of arcs with each other, and plenty of calculations.  If anyone made a change to the layout you had to start all over again. 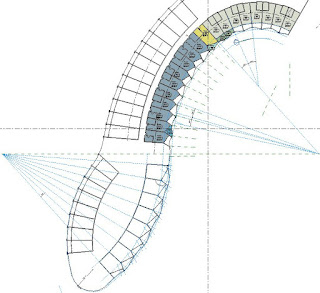 To improve this process in Revit, I decided to make a flexible component that would place a number of tapered hotel rooms along an arc.  Initially I tried a line-based generic component that required the user to click a start and end point - that worked fine for linear hotel rooms.

As soon as I tried radial arrays, it became a nightmare, as they are really hard to control with parameters.  As adaptive components had recently been introduced to Revit, that seemed to be the way to go - but then I realised that they do not allow the Array command.  'Repeaters' to the rescue!

All of this required a lot of complex fomulas and trigonometry, even with using Repeaters - particularly as I wanted the end user to be able to dynamically change and schedule room areas, widths and the radius. 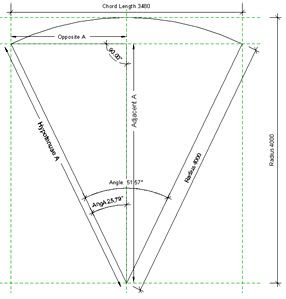 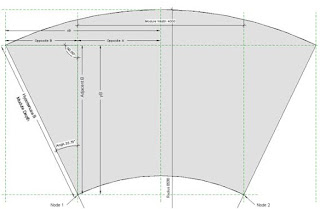 Eventually I managed to create an adaptive component that had two curves (concave and convex), forming a corridor double loaded with rooms.  This was fully parametric in terms of being able to stretch the start and end points and change the two radii as well as critical room dimensions.

This would have made the design process so much easier than relying on several different programs and yellow trace paper!  Creation of this component was fully documented in my handout for the RTC events in 2012 (Australasia and North America).  When I get a chance I will try to post some of the techniques on this blog.


The 2d planning was only the start of the challenges - each hotel room had a balcony that had curves in plan and in elevation, so that really challenged Revit's ability to create organic geometry - but we did succeed in building a convincing 3D model in Revit. 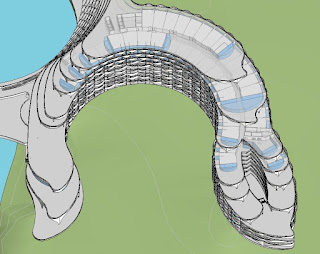 Of course, now you might be tempted to use Dynamo to build this sort of complex geometry.
Posted by RevitCat at 10:12