Got Your Repeaters in a Twist?

How many times have you tried to create a 'Repeater' from multi-point adaptive components in Revit, only for the result to be a tangled mess, instead of the neat array that you were expecting?

When you select the underlying 'Divided Path' that the repeater is hosted on, it will display the number of nodes (a blue number above the centre of the divided path)

It also shows up in the properties dialog box.  A few other useful properties are also there, including 'Show Node Numbers', which is off by default.  Try ticking the checkbox. 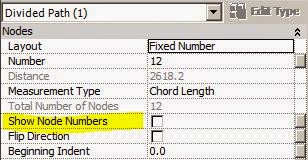 It will display each node number as well as the total

If you select the other divided path, and do the same thing, you may find that the node numbers go in the opposite direction.  Unfortunately you cannot display both sets of numbers at the same time - so you need to select them individually and remember the direction

If the numbers are in opposite directions, all you need to do is reverse one of them by clicking in the 'Flip Direction' checkbox.

You might be lucky and have the repeater magically untangle itself, but that is unlikely.  More likely it will still be wrong - maybe some missing elements if the node numbers are slightly out of synch.  It is probably better to undo the repeat command before you flip the direction.

Sometimes the hosted adaptive component will disappear when you flip the direction - in which case undo and delete it first - as Revit still thinks it is out there somewhere.

If you have just one hosted adaptive component, you may find that it just gets stretched to another location when the direction is flipped.

In which case you could select the adaptive point at one end, and rehost it to the correct node on the divided path

If that didn't solve the problem, it could be more complicated!  Have a look at some of my other posts on Repeaters - listed on the Repeater Index Page