When I installed Revit 2019 recently, I uncovered a problem that will undoubtedly affect some other people - in fact there is already some buzz about this issue on the forums: 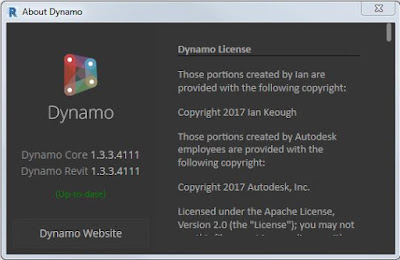 The latest versions of Dynamo do not support Revit 2016.
Refer to DynamoBIM blog


The theory behind this is that the Autodesk Dynamo team are working to a system whereby only three consecutive annual releases need to be supported by any version (2016, 2017, 2018  or 2017, 2018, 2019).  Typically Autodesk Revit licenses are set up that way, to only allow 3 years - but its only a license issue, not an inbuilt Revit limitation.  However, Autodesk realise that in the real world it is very difficult to manage a Revit installation in a company where you have multiple projects that need to be on different Revit versions to match up with varied consultants on each project.  Supporting 4 versions of Revit simultaneously is quite common in the industry - and Autodesk will supply licenses for this accordingly if you ask them (or your reseller).

There are two new Dynamo versions available:
That means there is no one version that supports both 2016 and 2019 - not even a brief overlap in time while you are updating graphs, custom nodes & packages.

Dynamo 2.0 graphs and custom nodes cannot be opened in 1.xx versions.  Some or most Dynamo 1.xx graphs and nodes will work in Dynamo 2.0 but there is no guarantee - see DynamoBIM Blog 2.0 and Beyond for more detail. 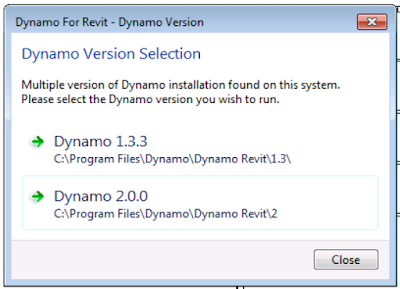 I don't think that you can have both 1.3.2 and 1.3.3 running in parallel like this - I have not tried it, but that is the word I see on forums.  I believe that one install messes up the other - and you can't choose which versions of Revit to install Dynamo to.

If you do want to have two versions of Dynamo installed (one being 2.0), you will need to maintain two versions of all your graphs, custom nodes and packages.  And don't get them mixed up!

If you have any projects still in v2016, you will need to consider very carefully how you handle your Dynamo versions.  I would personally recommend that you hold off Dynamo 2.0 until you are quite certain you won't ever need to do anything in Dynamo in Revit 2016 - once you make that leap to 2.0 there is no going back.

It would be really helpful for us if Autodesk were to give us a version of Dynamo (1.xx) that is just like 1.3.3 but supports Revit 2016 too (ie. 4 consecutive Revit versions).  I believe there is no technical reason why not - its just a decision making process at Autodesk.  That would help us get over this tricky version management situation until things have moved on a bit - then we can all stop using Revit 2016 and the Dynamo 1.xx series, in our own good time, and move on to 2.xx series Dynamo.  Happy ever after.  Until the next major release, that is!

Prevention is Better Than Cure - a Dodgy 2016 Workaround

If you still need 2016, you should protect your older Dynamo install for Revit 2016 before you do the Revit 2019 install.  I tried this rather dodgy workaround - from what I read on the DynamoBIM forums:

Make copies of these files (assuming Dynamo 1.2 but just substitute 1.3.2 if that is your version):
Then replace those files where they were before the 2019 install stripped them out.  Of course it means that the uninstaller won't work for that version of Dynamo, so you'll have to remember to remove them manually later.

In my case, it was too late - I had already installed Revit 2019, so I found a Dynamo 1.2 installation on another computer and copied those files to the computer where they had gone missing - to my surprise it actually worked.

Warning:  be very careful messing around with deleting/copying files and folders in your Program Files directory - do this at your own risk.
Posted by RevitCat at 16:47