The solution to this is to use a Revit Add-In product.  My favourite is 'Ideate Explorer', which is robust and fairly comprehensive:
'Explorer' is a tool for model-management and auditing Revit projects - but is also very useful for finding objects, be they hidden or just not easy to identify using standard Revit tools.  One of the things it does is clearly separate model and detail lines in a selection, active view or even the whole project.

Once you have narrowed down the filter to just the detail lines (if that is what you want), they are now selected so that you can now deal with them.  In the example below, detail lines have been used to indicate a floor penetration, which is a serious Revit misdemeanour!  They need to be replaced by a 'Shaft Opening' object.  However, that would mean recreating the dimensions - so if your drawing needs to be issued in the next 5 minutes, the least you could do is convert the lines to model lines using the 'Convert Lines' tool. 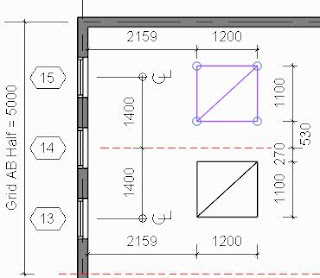 Ideate Explorer is somewhat overkill for such a simple task, so from this year you can now use a sort of cut-down version called 'Ideate QuickSelect' - this just allows you to select or filter specific items in a similar fashion (by current selection, active view or whole project), without having any capability to further analyse the elements.

These tools are great for finding other things that should not be in your model such as images or imported DWG files that have been placed and hidden on views - Explorer tells you which views they are on.  In that situation, when a view containing hidden items is duplicated with detailing, the hidden items are duplicated too, and remain hidden, which can rapidly lead to project file-size bloat.  One improvement to 'Explorer' would be to display the file size of imported DWGs and images.
Posted by RevitCat at 10:42