If you add a dimension to elements that already have a ‘global parameterised’ dimension, the new dimension automatically takes on the same parameter, without you realising.   If you subsequently delete that dimension, you get a message saying ‘A Dimension that is labeled . . .’  Unconstrain to remove constraint

If you associate a GP to a dimension, and then subsequently delete the dimension, Revit will ask you if you want to unconstrain (remove the constraint) – this is good behaviour. However, if you edit a witness line instead of deleting the dimension, Revit removes the GP association (as you would expect), but does not ask if you want to remove the constraint – effectively hiding the constraint. This is really bad behaviour by Revit, because it means you can end up with lots of hidden constraints, which catch you out later on. Autodesk refuse to accept that this is an inconsistency in the software that should be changed. I recommend that you never edit a witness line on a GP associated dimension.

If you have a family that has grip handles when placed in the model, those handles can be ‘hidden’ when GPs are associated with certain properties in the family. This happens if the property is used in a formula that drives the geometry related to the shape-handle: 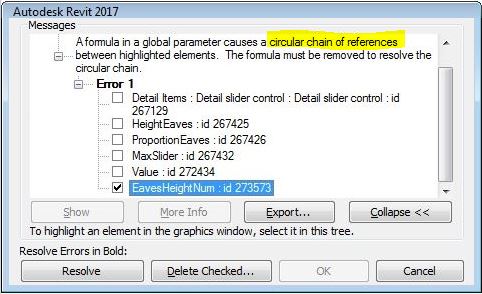 If parameters are changed from instance to type in a family, then reloaded into a project, you may get this message if the parameters had been associated to GPs

If you duplicate a family type that has GP associations to any type properties they lose the associations.